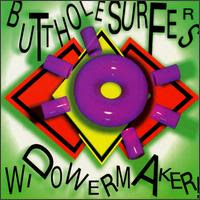 This is the only Butthole Surfers record I own. Things will probably remain that way. They've always been a bit much for me. Maybe I'm just too much of a stern traditionalist. I have always liked the idea of the Buttholes, but when it comes down to it, sitting through some of their songs has proven to be a chore. Needless to say, I have yet to pick up my copy of Rembrandt Pussyhorse. I may someday, because I would like to own a record with that title.

For now, I'll have to settle for my old cassette copy of Bongwater's The Power of Pussy. Oh, Ann Magnuson in 1990...but I digress.

There's only four songs on this meanie, so let's break 'em down the best I can:

"Helicopter" - The longest of the four, and it takes up the entire first side of this 12" 45rpm EP. It's a noisy jam, filled with the requisite madness, and not terribly unlikable. At almost seven minutes, that's saying something. Gibby Haynes' vocals are about half the reason this band is good, and he proves that here.

"Bong Song" - In case you were wondering, yes, they do a breakdown in the middle of the song to pause for some bong-hit-taking sound effects, complete with dude coughing out the hit. Pretty dumb. The rest of the song is out of tune and nutty, with Gibby ranting rhythmically, possibly through a bullhorn.

"The Colored F.B.I. Guy" - And, we get to the reason why I own this record. Completely out of place on this EP and absolutely brilliant, I have never understood why this song wasn't more popular. It even sounds radio friendly to me, but what do I know. You can hear it playing briefly during a scene in the film Slacker, but I've never seen it given any exposure elsewhere. Reserved and melodic, it seems to be the antithesis of the commonly accepted Butthole sound. It also lets you know that they're capable of being really, really, good. But then there's...

"Booze, Tobacco, Dope, Pussy, Cars" - And just that quickly, they're back to the madness. It sounds like they revved their drum machine to the breaking point and just went with it. The title is the chorus. I've always assumed it's ironic. If not, god help us all.

And, that's it. I think the whole thing's about 15 minutes long. I have always wished "The Colored F.B.I. Guy" was about two minutes longer, but you can't win 'em all. And, you know, maybe King Coffey wanted to keep it short.

This was one of the very first "alternative" things that I ever owned. I bought this on cassette at Paramount in Salem on the strength of the band's name and the fact that it was their cheapest album. I was in 6th grade. I remember that I brought it to Cdog's birthday party and he proceeded to mock me mercilessly for owning something by a band called the Butthole Surfers. This little album rules.