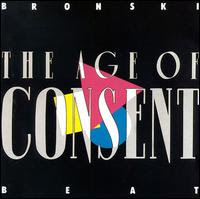 In case that big pink triangle in the middle of the album cover didn't tip you off, Bronski Beat is gay. Like really gay.

If you missed the pink triangle on the front, there's one on the back. And if you missed that, don't worry: the first song ("Why?") is about making out with a dude. So, they weren't in the business of hiding their sexuality. That's pretty gutsy, considering this was 1984, and also considering the title they chose for this, their debut LP. Apparently they took some shit for it. But, good for them. Like I said: gutsy.

The inner sleeve of this record contains the ages of consent for "lawful homosexual relationships between men" in various countries, along with the number for the National Gay Task Force. So, yes, they've made their agenda clear. And they make it even more clear in during the course of the 10 songs on this LP.

While the music is synthy pop, the songs are at times incredibly serious, taking on gay bashing, war, drugs, and religion. But, there's also songs like "Heatwave," which is just a fabulous gay party anthem, and "Need A Man Blues," which is pretty self-explanatory.

This record (and the band, for that matter) is probably best remembered for "Smalltown Boy," a catchy tune about a kid running away from home because nobody accepts his homosexuality. It's one of those weird songs that is both terribly tragic and super catchy, and if you're not paying attention, a fun little dance number. I have a feeling this was constantly a problem for the Beat. They're opening up about a serious societal woe and kids are swinging their hips with a spoon up their nose.

In all honesty, it's a great song. And this record is well worth the dollar you will have to pay for it.