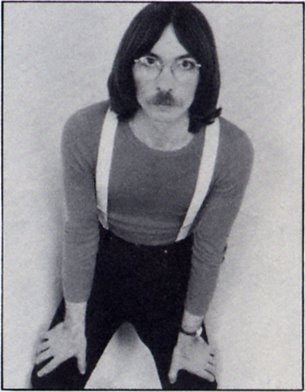 I think it's safe to say Greg Hawkes achieved Stallion status with this photo alone. But he did so much more.

There are a handful of groups who have a clear leader, usually the sole songwriter, and often the lead vocalist. Sometimes there is a member of that group who, though not often appropriately recognized as such, is the right-hand man of that leader and adds considerably to the distinct sound of the group. David Byrne had Jerry Harrison, Black Francis had Joey Santiago, and Ric Ocasek had Greg Hawkes.

It's hard to hear it now because the things Hawkes was doing sound a bit less remarkable thirty years later, but in 1978, there weren't a lot of guys who really knew their way around a synthesizer. Watching Hawkes in any early Cars footage, it's clear the dude's rig was bigger and badder than most of the tinkerers out there. And he knew how to play it.

He anchored some of the group's biggest hits (it's a beautiful moment when that Moogy thing kicks in during the second verse of "Good Times Roll"), but also managed to push the envelope on songs that were wonderfully not radio-ready. He goes crazy on Panorama, having a huge hand in some of the Cars' most creative and bold music.

When you're writing songs that are straightforward, yet complex enough to leave room for some textural fiddling in the background, you've got to have a guy who's not afraid to try some weird shit, while also knowing exactly what he's doing. Greg Hawkes was that guy; the curious little wild card in The Cars that made them a much better band than they would have been without him.

For that (and for the white suspenders), he is nothing short of a stallion.

Here he is playing "You Might Think" on the ukulele.
Posted by Wockenfuss at 11:59 PM