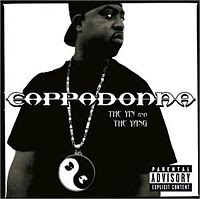 Some red flags for me when it comes to hip hop records:

- An intro where it's just the dude talking, explaining to you what you're about to hear, what you can expect, and what to prepare yourself for. "This album right here..." Rarely a good sign.

- A sophomore album that took three years and only has ten songs.

Hard to say what happened to Cappa between The Pillage and this one. I do know this: if the Wu guys have had one proven weakness, it's believing their own hype. It usually leads to delusional hubris, a diminished view of the RZA's role in their career, and the egregious misconception that they're continuing to change the game when they're cranking out songs called "Love is the Message."

After his debut, I was ready to go to the wall for Don-Don, but come on. Da fucking Brat raps on this. RZA's nowhere to be found. The beats have fallen off. And who the hell is Jammie (sic) Sommers?

Ghost, Rae, Killah Priest, Timbo King, and Shyheim try to save it, and there's some moments, but in the end, this is Cappadonna's Tical 0.

That'll make sense to some of you.

I'm sorry, but I have to defend poor Cappa from your review here. Yes, "Shake Dat" and "We Know" are skippers. Yes, the final two tracks, heavy with reggae, aren't the best. But the rest of the material here is pretty good. "The Grits" is a great opener. "Girlfriend" is OK but suffers from poor recording quality. However, there are some strong tunes to rebound. "Big Business" and "Revenge" are great Wu tracks and "Bread Of Life" and "Love Is The Message" are as good as anything he has done. While I agree that this is not the best album in the world, indeed it is far from it, however it is not as abysmal as you have made it out to be. Maybe its just the fact that I really forced myself to listen to it. Lord knows I love that Cappa.

And Jamie Sommers is the girl that raps at the beginning of "Wildflower" for 3 seconds. She also has some verses on Rza's albums as well as a Shyheim song. She is also the subject of a Ghostface line in "Iron Maiden:"

You know, since you asked. Wu-Tang!