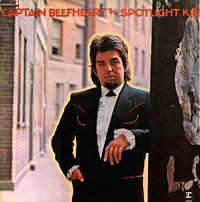 I had plans of becoming a Captain Beefheart fan, but this remains his only LP I own (not counting Bongo Fury, his 1975 collaboration with Frank Zappa). And I like this record. I just haven't gotten around to picking up any of his other stuff.

From what I understand, this is one of Beefheart's more accessible albums, and therefore probably one of the least favorite of his die-hard fans. So, maybe that explains why I find it quite enjoyable.

If you weren't listening closely, you'd mistake this stuff for early Tom Waits. Beefheart's vocals are raspy but mostly melodic, and the lyrics are semi-nonsensical poetry, something that he's quite good at. I feel strange really breaking this record down without proper knowledge of the records that bookend it, but hey, I watched a Beefheart documentary on YouTube six months ago, so I'm not completely clueless, right? No, I am. But I think this record was Beefheart's attempt at going mainstream after becoming frustrated with his career path.

It's still not very commercial, though some of the songs feature some easy to handle progressions without branching out too much. However, tracks like "Alice in Blunderland" and "There Ain't No Santa Claus on the Evenin' Stage" keep it nice and weird. In the end, it's more about Beefheart's voice and lyrics than the music on this one. He may not be for everyone, but most of the time, it's just odd enough to work.

Ah, the early 70's. When a guy like this was considered a viable enough option to be given a major label record deal.

He remains on my list of artists of which I need to own more records by.

"I'm Gonna Booglarize You Baby"
Posted by Wockenfuss at 11:23 PM