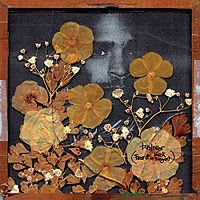 I don't remember where I first read about Busdriver. I do know the article intrigued me, and I put him in my mental list of artists to check for when scrounging through the used CD bins. I lucked out a few weeks later and came up on this one. It was a good move.

The term "abstract hip hop" is tossed around far too much, and while this CD certainly qualifies, it doesn't fit the typical definition. It's not self-indulgent, glitchy, slow, or trying too hard to be smart. It's almost nerdy, sometimes strangely poppy, and mostly just really interesting.

I don't have a lot to say about it because it's a fairly recent purchase, but I've been listening to this in my car more than anything else I've picked up recently. The beats are dense, his style switches on almost every song, and dude's got lyrics for days. Though a lot of them seem like nonsense, it's way more fun than Aesop Rock.

I've realized I have a pretty low tolerance for "abstract hip hop," but I don't have a problem bumping this one all the way through. That's saying something.

"Avantcore"
Posted by Wockenfuss at 11:07 PM