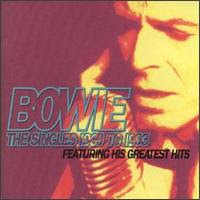 Confession: I don't like David Bowie nearly as much as I am supposed to.

Sure, I'll tell you I like his music. Ten years ago I would have told you I loved his music. I was lying then, and I'm mostly lying now. I do have legitimate fondness for a few of his songs, but when it comes down to it, I never put his music on by choice. I know for a fact I used to have Changes on CD; and I'm sure I used to have Aladdin Sane and David Live on LP. I don't anymore. And I just noticed that. I bet I traded or sold them years ago. And it's rare that I trade in records.

I bought Aladdin Sane at a weird thrift/record shop in Eugene in or around 1995, and although I tried my best to like it, I just never got into it. It looked good on my shelf, but it was all show. I even went to see David Bowie live about four years ago. The tickets were free. It was a fine show, but when it was over, I was ready to leave. But I'm sure I told plenty of people that I went to it. That's my sad existence. That's my cross to bear.

My initial infatuation with Bowie rests in a sad, terribly cliched high school party happening that, at the time, seemed mind blowing. In actuality, I'm an idiot. I was at a get-together when I was probably 17, and somehow ended up with a group of people in some guy's car, passing around the doobage. We were out in the country, and the kid who was having the party lived on some big piece of land. It was a clear night, and after we got horrendously stoned, our driver turned the lights out on the car and drove, very slowly, through a field that slanted upward and directly towards the moon. He blasted "Space Oddity" and we bounced over the divots in the dirt, staring at the sky and "freaking out, man." I knew the song before this, but bro, I had never really heard it. I shit you not. This is how high and dumb I was.

Turned out, after I came down from the effects of the reefer, Bowie was only so-so. I kept trying to recapture the magic/idiocy of that night, but it never happened. I've had this collection for probably 15 years, and I bet I've never even listened to the second disc. "Loving the Alien"? What the hell is that?

But, I will say this. He has some great songs, and while I may not be a huge fan of some of them, I've always been able to respect his place in the annals of rock. However, I've long since given up hope of being a true Bowie fan. I'm more of a Marc Bolan man. We'll get to that.

I think that "Under Pressure" is the only song of his that I really really like. Which is odd because I don't really like Queen or Bowie. Go figure. That was a great story you dirty burner.