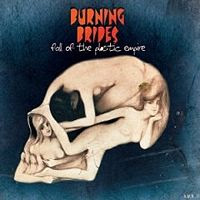 I saw Burning Brides on some late night talk show in 2002, performing "Arctic Snow." I must have been in rock mode, because for some reason, the song struck me. Don't get me wrong, it's a good song, but not the kind of full-bore rock that I usually glom onto. I must have made it to the record store before the feeling wore off (and before I forgot their name), because one discount priced, hole-punched promo copy later, I was the proud owner of this, the major label re-release of their debut album.

I haven't listened to this in a few years, but I did give it nice run back in '02-'03. There was a short period where I was really into this and the Von Bondies. They're almost interchangeable soundwise. It's garage rock for the kids who don't know who the MC5 are. With songs good enough to keep dolts like me mostly interested. Burning Brides may have had a hot lady bass player, too. Might've sweetened the deal.

A few things I do know: the band name and the album title are a little much, and certainly stand out amongst my piles of apathetic indie rock. Fall of the Plastic Empire sounds more like a scrapped Marilyn Manson title to me. And songs like "Blood on the Highway" and "Stabbed in the Back of the Heart" aren't helping their cause.

But, if I find myself in rock mode, I know it's there. I guess that's why I kept it. That, and because I still like "Arctic Snow" more than I want to admit.