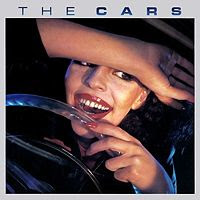 When you talk about groups coming out the gate strong with a solid debut effort, you have to talk about this record.

The Cars are up there with Talking Heads as one of the most important New Wave bands that came out of the late 70's/early 80's. When it comes to substance, I think David Byrne's got Ric Ocasek beat, but if you're talking about commercial appeal, Ocasek would easily be declared the winner. The Cars' worst records were merely a little weird, while their best ones play like greatest hits compilations. This is one of the good ones. Check the first three songs on the first side: "Good Times Roll," "My Best Friend's Girl," and "Just What I Needed." Not a bad beginning to a music career, eh?

Throw in "You're All I've Got Tonight," "Bye Bye Love" (you may not recognize the title, but I bet you've heard it), and "Moving in Stereo," and you've got the makings of a classic. That only leaves three other songs, and they're not half-bad, either. I've always liked "I'm In Touch With Your World." It's one of those Cars songs that is a little darker than the radio hits, just to let you know they're not all fluff. "Don't Cha Stop" is as poppy as it sounds like it would be, just a little three-minute romp. "All Mixed Up" is the oddball, with a uncharacteristic acoustic intro that bleeds in from the end of "Stereo." A little medieval sounding for me, but it's a sensible closer.

I was in the dark for a long time about the extent of bassist Benjamin Orr's duties as a lead vocalist. Sure, we've all seen the "Drive" video, but I thought for the longest time that was just a one-off. As usual, I'm an idiot. I'm beginning to be able to tell he and Ric's voices apart, but I'm still not great at it. Orr sings lead on four tracks here: "Just What I Needed" and the final three songs on side two. When you watch old live footage of the group, it's clear Ocasek is not much of a stage presence. Whether that had anything to do with Orr taking on lead vocals, I don't know. But, dude can sing, and he was the resident ass-shaker/semi-androgynous pretty boy in the group, so he worked well as a frontman.

They released a deluxe edition of this record about a decade ago, with a full disc of demo versions and unreleased tracks that didn't make the cut. My aunt bought it, had no use for the bonus disc, and let me have it. It's pretty sweet. The songs definitely benefited from some studio polish, but Ocasek's ear for pop melodies is extremely apparent. I'm still not sure that guy gets enough credit.

"Moving in Stereo"
Posted by Wockenfuss at 11:36 PM

I bought a live Cars DVD, circa '79, that made me feel real stupid. There's Orr singing basically half of the songs. I, like you, never realized that they were somewhat of a dual frontman band. It actually made them that much cooler to me. This album is scary good. And Orr was 10 times the rock star that Ocasek was.