David Byrne - Songs from the Broadway Production of "The Catherine Wheel" (LP, 1981) 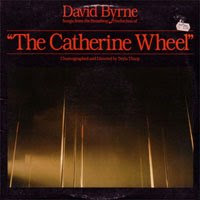 I am a Talking Heads fan. A big one.

That is why I own this record. It's been a really long time since I slapped this one on the ol' turntable. I remember liking it, and as I'm listening to it now, it's coming back to me a bit. Brian Eno had a hand in the making of this one, so that should tell you something about it's abstract tendencies. They are there, and if you're into that sort of thing, this is a semiprecious gold mine.

Byrne was arguably near his creative peak during this period, having just released Remain In Light with Talking Heads, and his much celebrated first solo record, My Life in the Bush of Ghosts (another one with Eno). I don't know why I never picked that one up.

Anyway, I don't have a lot to say about this one. The highlights for me are "Big Business" and "What A Day That Was," because they ended up being performed by Talking Heads in the Stop Making Sense film. "What A Day That Was" is a much more sparse version on this one, and it's actually pretty cool to hear it sheared down to the minimal groove and some odd percussion. Great lyrics. As usual.

It's pretty sad that this is the only David Byrne solo album in my collection. I think I might have a copy of Uh-Oh on cassette, but still, pretty sad. One more thing to add to my list...

"My Big Hands (Fall Through The Cracks)"
Posted by Wockenfuss at 11:52 PM