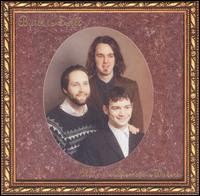 The appeal of Built to Spill is often hard to pinpoint, and even more often, frustrating to embrace. For a while, I was convinced they were poised to save music. Then Doug Martsch stubbed out his cigarette, took one last look at the floor, rolled his eyes back, and soloed for so fucking long I got tired of waiting for them to do it. I was eventually forced to realize they have no interest in being that band. It's not really their deal. Fair enough.

This is their first record, which I've always liked, but I think that's partly due to the fact that it wasn't the first record of theirs I actually heard. I'm pretty sure I heard their first two albums in reverse order. Anywho. BTS was a bit of a latecomer to the NW rock scene, so once the buzz started, we (my brother and I) were ready to resist. "Hey, cool name!," we'd say sarcastically. "Hey, fuck those guys!," we'd say with mock-seriousness that was mostly real, completely uninformed seriousness. Yes, it's tough being this cool.

It was even tougher deriding the group after we actually heard them. (Remember: always listen to the band, at least for a second, to confirm that they actually do suck. At least check out a photo. Sometimes that tells you all you need to know.) They were good. Really good. My brother heard 'em first, told me to tuck my tail between my legs, and gave me a tape. Yowsa. Anyway, it wasn't this album. It was the next one. But, I heard this one shortly after that. This, being the debut, is really good, but it's also one of those the-sound's-not-totally-fleshed-out-yet records. Though it's really close.

That being said, some of the songs are just perfect. "Three Years Ago Today" is a fuzzed-out beauty, a song that, maybe more than any other one on this album, is directly representative of where their sound was headed. Just an incredible song. I always loved that they have a song on here called "Built to Spill." I was just thinking about how I love bands that do that. Of course, I was thinking about Bad Company. Another one of my dirty little secrets.

The wanking starts on this one, too, and that's my only real beef with it. "Nowhere Nothin' Fuckup" and "Hazy" are both pretty good songs, but maybe a few minutes too long. It gets egregious on "Built Too Long Parts 1, 2, & 3," but at least they yuk it up with the title. And, it's the last track, so it's easy to avoid it if need be.

Overall: the start of something good.

"Three Years Ago Today"
Posted by Wockenfuss at 11:29 PM

I don't mind poorly recorded music, but this one stands out as the music is so ambitious and yet the quality is decent at best. It actually kind of adds to the charm if you ask me, it makes it sound more "indie" than it was perhaps intended to be. Nevertheless, there are some mesmerizing songs here. "Three Years Ago Today" is near perfection. Both "Nowhere Nothin Fuck Up" and "Revolution" are strange yet incredibly catchy. I was surprised that you left out "Lie For A Lie" as it completely rules. The bad thing about this record though is the amount of wank that made the final cut. "Shameful Dread," while a decent song, never seems to end. "Hazy" sounds like stoner rock and I won't even touch the 9-minute wankfest that closes the album. I remember that I had "There's Nothing Wrong With Love" first, which I believed was the greatest thing ever made. Then I bought the Built To Spill Caustic Resin EP, an album that a wank flavor that I attributed to Caustin Resin, a well known wank band. When "Perfect From Now On" came out I was semi-disgusted. What was this? It made no sense. Where did all this wank come from? Then I finally picked this up and it all made sense. "Perfect From Now On" wasn't some strange new direction, it was a continuation of things begun on "Ultimate Alternative Wavers." I had been a fool all along. Once I had this knowledge, life made sense. Life made sense.