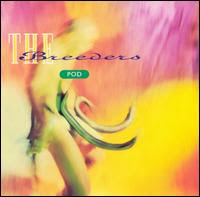 You get the vibe The Breeders started out with little aspiration, that maybe it was not much more than a way to pass the time, so it's actually quite remarkable they're as good as they are. Looking at Kim Deal in the Pixies, you wouldn't really peg her as someone with the ability to write some really great songs. Sure, "Gigantic" has always been a fan favorite, but she had a way of coming across as ditzy and unfocused.

The Breeders' music is the exact opposite. While it's fun and a bit noisy in parts, you can tell it's all deliberate, and that's what's great about it. This records has the feel of a side project, as there are multiple drummers and the sound quality is scattershot. Also, covering a Beatles song and placing it as the third track is a gutsy move. In my mind, it compromises a bit of legitimacy, in both the song they chose, and where they chose to put it. Maybe that's over-thinking it, but what the hey.

This album's really short, so maybe they needed to fill some time. Either way, the songs that are Kim Deal originals here are really good, though, for me, it took some time to adjust to the lo-fi-ness of it all. Her vocals are buried on a lot of the tracks, and rather than sounding like part of the music, she often just sounds really far away. It's tough to get past that, but if you can, the songs are fun. And, like I said, they're short, which is a good call for some of them. But, songs like "Hellbound" could be a minute longer and it wouldn't bother me.

Deal's lyrics are interesting, and it's too bad that some of them are rendered unintelligible here. They really work on songs like "When I Was A Painter," which is pretty basic all-around, but nonetheless a song that gleefully reeks of everything that was great about early 90's alt rock.

This album frustrates me. I've always enjoyed it but have also felt that the poor recording really takes away from the tunes. I'm not a huge Albini fan anyway but I never understood how this came out sounding so bad. That being said, "Fortunately Gone" is one of the catchiest songs ever written. "Doe" and "Opened" also stand out for me. The Beatles cover, especially its placement, was definitely a poor choice.