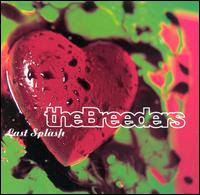 This CD came out a few weeks before my senior year of high school. I remember the first time I heard it, and being floored that it was the same band who I had heard doing "Safari" a year before. While that song was sonically leaps and bounds ahead of Pod, it didn't prepare me for this one. I still don't know what it was, but The Breeders went from "Kim Deal's other band" to MTV heroes overnight. And they deserved it. This album is that good.

The Pixies had broken up, and judging from even the first ten seconds of this record, Kim had been putting all her time into this thing. When the aptly titled "New Year" starts, something fires up, and Kim half-cries "We have..." and then the whole fucking thing crashes in, and it's really something. By the point where it goes to double time and the song really takes off, you struggle to figure out what's going on, where the hell this all came from, and then it's over. Then "Cannonball" comes in and then it happens all over again.

This album will always be linked with "Cannonball" (and so will the Breeders, unfortunately), but it's really selling the whole of this record short. While "Cannonball" is, at the end of the day, a great little song, I'd take "No Aloha" or "Divine Hammer" over its click-clackiness every time. Same with "Do You Love Me Now?", a song that surely graced countless teenage mix tapes in the mid-90's.

I think part of me loves this record because I still equate it with a simpler time in my life, but it's also not my fault that that simpler time happened to be a time when some really important records were being made. While an album like this was probably considered a "minor" hit in 1993, that was partly because there was so much other great stuff happening. That a band like The Breeders could have a radio/MTV hit with a bizarre song like "Cannonball" actually gives me pride in my generation. That's a weird thing to say, and it makes me sound old.

Whatever. This album is 15 years old and it still sounds fantastic.

I am always have ashamed to admit that this album rules. I am not ashamed to like The Breeders, per se, it's just that I'm sometimes ashamed that I like this record so much. "New Year," "Cannonball," "Divine Hammer" and "Saints" are all incredible songs. What strikes me as fascinating about this album is the sudden leap in Kim Deal's songwriting. Sure, "Pod" is good, but it's not exactly complicated. I have no idea what she was doing during this brief period, but she was certainly in what I like to call "the zone." This is further proved The Amps album, released a year later, that is like a poor man's "Pod." Who knows? "Divine Hammer" is so good it feels like a cover song. I know that you didn't review it, but "Safari" is one of the greatest songs ever.