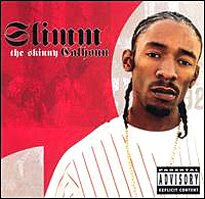 After Outkast put out Stankonia, it was becoming clear they could do no wrong. I was ready to follow Big Boi and Andre to Jonestown, that's for sure. So, when they announced they were starting their own label (the short-lived Aquemini Records) and Slimm "Cutta" Calhoun was going to be their first artist to release an album, I was ready.

Calhoun had kicked a solid verse on "Gangsta Shit" from Stankonia, but other than that, not much was known about the dude. Seems like he might have been poking around in the background of some Outkast videos, but never really struck me as the "star" type. Then I heard "It's OK."

When it comes to songs that should have been immense radio hits (especially during the summer, especially with a guest spot from Andre) but weren't, this one always comes to mind for me. ("In Da Wind" by Trick Daddy is the other one that I just can't believe wasn't the new hip hop anthem for the oughts. Proof positive that most people are hopped up on idiocy.) The hook is undeniable, the beat is immediately catchy; it's just a perfect hip hop single. I picked up the 12" before the record dropped, and was blown away. If this was any indication of what the rest of the record had in store, this thing was going to be huge.

Turns out "It's OK" was the best song. And why it was tucked in the middle of this record at track 8, I'll never know. But, this is by no means a bad album. I almost feel bad for the dude. With Outkast's stamp of approval but no chance of dropping an album as memorable as Stankonia, he was sort of fucked. And when Big Boi, Andre, and Killer Mike rap next to him, they make it clear that he's close to being demoted back to the minors (he eventually was).

With songs like "All Da Hustlers" and "On Tha Grind," Slimm shows that his imagination has already reached its limits on his debut. And some of the beats sound like they probably weren't good enough to make it onto any of the 'Kast shit, so they ended up here. Plus, at over an hour long, this one goes on a few songs too long. But, "Dirt Work" features Big Boi showing once again he's one of the best rappers alive, and "Red Clay," the opener, is an ode to the South that comes off as smarter than 90% of the hackneyed attempts out there.

"It's OK" was just too good. He came out early, dropped it big, and had nowhere to go but down. Damn.

I still don't get how "It's OK" wasn't a huge hit, especially with that sweet video. Slimm's main problem is that he really isn't that great of a rapper. There's nothing really to his style, nothing creative. So you're totally right, up against the other DF guys he appears to be out of his league. Was this his only album?