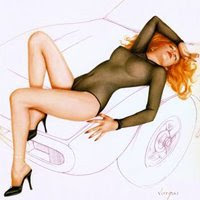 If I haven't mentioned it already, though I'm sure I have, it should be known that I'm a big fan of sophomore albums.

The Cars blew up big with their debut a year before this one, so it makes me even happier that this record is not as hit-filled. It's still a great record; it's just noticeably more restrained than their debut, focusing even harder on simple melodies and a standard pop format. It makes for some great songs, though this one takes a while to get revved up.

It kicks off with "Let's Go," which we all know and love. Just further proof that Ric Ocasek was one of the few people in the 80's with an ongoing knack for writing almost perfect pop songs. Benjamin Orr sings lead on the first three songs, keeping it smooth and, unfortunately, a bit shallow. "Since I Held You" and "It's All I Can Do" are solid songs, but they're more good than great. Ocasek finally shows up on "Double Life," which gets more ambitious with the lyrics but keeps the arrangement simple.

Things really get going with "Shoo Be Doo," a song that sounds nothing like its title. The electronic madness beginning bleeds in from the end of "Shoo Be Doo" and finds Ocasek sing-talking over a dense, computerized beat. It grows slowly, finally cutting off unexpectedly when "Candy-O" kicks in. This is the best song on this record. The main riff is way heavier than anything The Cars had tackled to this point, and it changes the vibe of this album immediately. This is another one that Orr took lead vocal duties on, half-droning and mirroring the feel of the music perfectly. Don't let the photo of him seductively sucking on a lollipop from the back cover fool you: he means business.

The second side keeps the rock going, with "Nightspots" mixing guitars and electronics into some more heavy but calculated mishmash. "You Can't Hold On Too Long" and "Lust for Kicks" feature Orr and Ocasek, respectively, bringing the sparse pop sound, working some melodies that mostly work. The guitars come back big on "Got A Lot On My Head," and continue on with "Dangerous Type," which was apparently never released as a single, though it should have been. A great song to end on.

Worth mentioning: The Melvins cover "Candy-O" on their Ozma LP. And it's pretty sweet.

"Candy-O" is one of those funny songs where the cover version sounds like the real one to me and the original sounds like the cover. It really works as a Melvins song, which makes it that much more of a genius cover. As sophomore albums go, this one is pretty tough to beat.