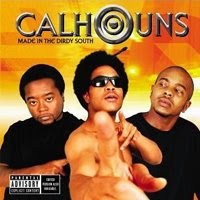 Cool Breeze (or Freddy Calhoun, as he's known on this disc) claims he invented the term "Dirty South." It's a shame that he leans on this as his claim to fame, because he's a better rapper than 90% of the jokers you'd normally associate with the term.

After his standout verse on "Slump" from Outkast's Aquemini, I was sure dude was headed for the big time. He ended up getting knocked around and only releasing an edited version of his debut, East Point's Greatest Hit. It featured the near-brilliant "Watch for the Hook," but he didn't seem to show any long-term prospects, as he failed to show up on another Outkast album.

He teams up with a couple guys calling themselves Pauly and Lucky Calhoun for this, a decent but flawed attempt at proving who really runs the dirty dirty. (Isn't that the point of all these Dirty South records?) Breeze out-raps everybody on the tracks he's on, and the ones he sits out seem pretty vacant. The positive side: this record could be a lot worse. Organized Noize provide some solid beats, and all the other production is alright as well. As usual, there's too many skits (the intro is an exercise in tedium) and some embarrassingly dumbed-down tracks like "9 Months," but that's to be expected. In the end, there's actually way more good than bad. Just not a ton of great. But, much better than that budget cover art would indicate.

The wild card: DJ Hurricane, formerly of Beastie Boys, guesting with a verse on "Owe Me." And, if you were wondering, yes, Slimm Calhoun makes an appearance. Both in the group photo on the back, and with a smooth verse on "Some People."
Posted by Wockenfuss at 11:04 PM

Cool Breeze has something that I can never get enough. I always place him in my top 10 favorite rappers list somewhere. His style is simple yet somehow all his own. He is confidence personified. As for his disappearance after his solo album, I think some of that is the fact that he was sued over his name and lost. Apparently there was some crappy band somewhere already named Cool Breeze, hence the change to Freddy Calhoun. He does show up on the Dungeon Family album but only on a few songs, one of which, "Forever Pimpin' (Never Slippin'), finds Breeze at his best. Apparently he was paid as a guest artist for the album instead of a group member, a slight that furthered the divide between Breeze and DF. As for this album, it has some great songs and some not so great. I still don't know why he went with a group effort instead of a solo album. It is too bad because he is way, way better than the other dudes in this group. "'Partments" is one of my all time favorite tunes, its Breeze at the top of his game.