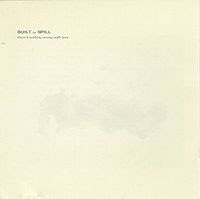 So, I talked a little about this record in the previous post. This is the one. This is what made me realize the simple truth about Built to Spill: they are a great, great band.

I read an interview with Doug Martsch a long time ago (I'm not going to even bother looking for it, so you'll have to trust me) where he said, and I'm paraphrasing, that after this album's release and the subsequent fanfare, he knew this would be the last Built To Spill album he could write with the possibility of no one really paying attention. (I think he was being asked about his plans for the follow-up LP.) Everything shifted after this one. And you can tell, because when you look at their entire discography, this album probably seems the most free. It's minimally produced, the songs are all fairly succinct, and it's so spot-on with its matter-of-factness that it seems easy. It's not. That is why this record rules.

Songs like "Big Dipper" and "Car" seem like they should have been written a hundred times before this, but they weren't. They work that well. You hear them for the first time, and you don't feel like "Oh, I've heard this before," it's more like "Why am I just hearing this now?" Or at least that was my reaction. When Martsch says "I want to see movies of my dreams," he rasps it out with a real conviction, a high-pitched sincerity that takes those high school poetry-ish lines and makes them not the least bit contrived.

It's usually not even an issue; most of his lyrics are just like the music: oddly distinct, completely unexpected, somehow making perfect sense in the context of everything surrounding them. "The Source" contains some of my favorite lines, quickly spat over a short break in the guitars:

I have no idea what this song is about. But the first time I heard that Kennedy line, I had no choice but to be a fan of this band. I think more than that though, if I really consider it, I'm a fan of this record. I was a bit late to the game with this one, so I was still bumping it well into the late 90's. It served me so well, I almost completely missed out on the next one.

I bought this LP probably a decade ago, and it's easily one of my more well-worn newer records, thanks in part to lots of late nights listening to "Distopian Dream Girl." Which, if you've never tried, I highly recommend. It's a front runner for the "Best Song With the Worst Title" award I'm thinking about giving out.

Anyway, you get the idea: if you don't own this album, don't make eye contact with me.

This is a record that I definitely have overplayed in my life. When I bought this I was living in a sad little apartment and would sit in my bedroom and wonder how a thing of such perfection could have existed for three years without reaching my ears. Sometimes being a cool guy does not pay off. Anyways, I became completely obsessed with this record, an obsession that only grew and grew as none of the band's other output even came close to matching it's pinnacle of pop perfection. Sure, a few songs on "The Normal Years" come close but it wasn't enough. Pretty much every song on here, except "Some," is mixtape worthy, a statement that rings true for precious few albums. "In The Morning" is one of the best album openers ever. "Reasons" never seems to get old. "Car" is probably one of the most overlooked songs of wuss pop brilliance ever set to vinyl. "Cleo" is maybe the only song written about a baby, except for Pete Krebs' "Sweet Ona Rose" that is actually great. I could go on and on about each and every song. What bugs me is that "Big Dipper" seems to be the best remembered song from here. While it is a wonderful song in its own right, it is by no means the best on the album and really barely even sounds like the band. Think The Pixies and "U-Mass." "Some" is the only song that completely gives itself over to wank, and as far as wank songs go, I have heard worse. And yes, "Distopian Dream Girl" is one of the worst song titles ever.

"Sometimes being a cool guy does not pay off." Ha. Guys, forgive me for trading this CD in despite liking it very much. Now I've got to find it again, used, per your reviews here. I'm hankering to hear it again.

It's been a few years.