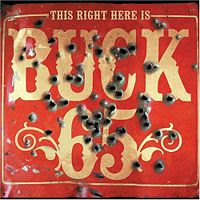 I feel like I should; I've read some great stuff about him, and it's supposedly the sort of hip hop that I like. But, this is the only Buck album I own, and I find it, for the most part, incredibly tedious.

I bought this under the impression that it was a collection of older songs, a collection meant to introduce the listener to the man's work. Turns out it's reworked versions of songs he had recorded previous to this release. So, without having heard the original versions of the songs, I feel completely clueless.

In all fairness, I probably haven't given this CD a fair shot. I've only listened to it a handful of times, but I haven't even begun to warm up to it. I don't skip the songs when they come through the shuffle on the iPod, but seriously. I just don't get it. The beats are pretty sweet, but dude just keeps it raspy and slow like he's narrating a movie. It's a chore.

Somebody tell me why I'm supposed to like this. Because I'm stumped.

I too, do not get Buck 65. And I don't care to. Boring is the word I would use to describe it. Yeah, boring.