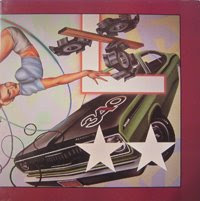 After using the same producer (Roy Thomas Baker) for their first four records, The Cars decided to mix it up on this one, bringing in one Robert "Mutt" Lange. Commercially, it clearly worked; this was their best-selling record since their debut, and if you remember 1984 at all, you remember how ubiquitous Ocasek's face was on MTV. So, this must be a really great record, right? Well...

This is a much more polished Cars. Any trace of Hawke's squeaky synth sound is gone, replaced by much more ear-friendly piano or airy woodwind emulations, and even those are often tucked in the background. The harder edges of the guitars are pared down as well, making the song a lot less punchy. If you're familiar with Def Leppard's Hysteria record, which Lange would produce a few years later, you'll have no trouble hearing the same influence here. The opening little vocal harmony that kicks off "Hello Again," the opening track on this LP, sounds a lot like the prelude to "Pour Some Sugar On Me." That's not a good thing.

The song itself has all the structural elements of a great Cars song, but it's almost too well done. The background vocals are so spot-on they sound fake. "Looking for Love" finds Ocasek hamming it up with the vocals, and the song ends up being soft and corny. I've always liked "Magic." It's just a fun and catchy song that doesn't aspire to be much else. Nothing wrong with that. And we all remember Ocasek walking on water in the video. That shit is mind blowing to an eight year old.

I'll give Lange credit for one thing: "Drive" is a song that benefits from this smoothed-over treatment. Benjamin Orr sounds great, the song builds intricately, and if they were setting out to make a song that was tailor-made for radio play, they did it. The background vocals are lame, but whatever. The first side ends with "Stranger Eyes," a fairly boring song that sounds like Hawkes being forcefully restrained from playing what he wants. What is that, a fucking muted flute? And the chorus is brutal. Pretty weak.

The second side opens with "You Might Think," a song that literally dominated MTV in 1984, thanks to its campy (or cutting edge, if you want to play it that way) video that showed Ocasek's unexpected ability to play a convincing fly and pour water out of his face door. I've always thought this song has a great chorus. "It's Not the Night" is a half-assed rocker that at least contains the sweet line "It's not the night for crazy eyes." That might be its only redeeming quality. "Why Can't I Have You" is equally watered down (seriously, Hawkes must have been so tired of whatever that piccolo sounding thing is), another love song that seems like it might be leading to something but never does.

Things pick up a bit with "I Refuse," another song that sounds like vintage Cars, but has some of its life sucked out of it with the terrible use of those backing vocals. But Ocasek's vocal verses are pretty sweet. The record wraps up with "Hearbeat City" (which is curiously listed as "Jacki" on the lyric sheet), one of the better songs on the record. Again, it's a little too smoothed over, but the background harmonies are pushed back far enough as to not be terribly annoying.

So, clearly this isn't my favorite Cars record. But, a watered down Cars record is still better than a lot of stuff. So I'll stop whining.

This one has not aged as well as one would assume. I never put together the "Hello Again" and Def Leppard connection. Nice call.