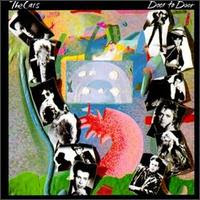 This record isn't nearly as bad as some people might lead you to believe. More than anything, it's just one of those albums that is remembered as a half-important afterthought because the band broke up a few months after it came out. So, if the group doesn't sound too enthused, that would probably explain it.

But, about half of the songs here are pretty good. The first side starts with "Leave or Stay," apparently an old song they re-recorded for this record. You can tell, and that's not a bad thing. It's vintage Ocasek: chugging guitar and a nicely chopped delivery. "You Are the Girl" was the song meant to be the big single, and they lay the radio-friendliness on pretty thick. It's not a bad track, but the chorus and background vocals are reminiscent of some of the weaker aspects of their previous record. (I should mention that Ocasek produced this one himself, the only Cars album on which he would do so.)

Benjamin Orr takes over lead vocals on "Double Trouble," a screechy guitar number that just oozes 1987. Easily one of the worst songs the group ever recorded. It's followed by "Fine Line," a smooth and slow ballad that features a strong melody, but it goes on about a minute too long. "Everything You Say" finds Orr coming back with the vocals, leading the way on the quick poppy number that sounds strangely like Tom Petty in the verse, but breaks out in the chorus. Not bad. "Ta Ta Wayo Wayo" is another old song they re-recorded for this record, and it sounds a lot like the first cut. Fast, short, thick with the guitar; it's not unlikeable.

Side two starts with "Strap Me In," another song that reeks of all the shit we thought was cool in 1987. The chorus is just a mess, a big group chorus followed by some brutal wanking. Another Cars song I'd like to forget. "Coming Up You" is another Orr-sung number, and another song that sounds very '87, but this time it's a good thing. It's a simple pop number, but the synths are employed perfectly. Not a mind-blower, but a good little song.

"Wound Up On You" is like "You Are the Girl" but slower and not as good. Thankfully, the record ends strong with "Go Away" and the title track. "Go Away" is Orr's last album track with the Cars as a lead vocalist, and it's the best song on this record. The mix of synths and guitar is there, and that's really where the Cars are at their best. Orr makes this song even better, getting deep (in tone) with the verses and bringing it back up for the sweet chorus. "Door to Door" is the band's punkest song since "Candy-O," and just a bizarre (but great) song to end their career with. Machine gun drums, a great hook, and when it's all over, a door slams (literally; there's a sound effect) and The Cars are no more.

I owned this CD for awhile and could just never get into it. It doesn't have one great song to hold it all together. It seems more like a contract obligation than a well put together album. But yeah, the song "Door To Door" is pretty good.