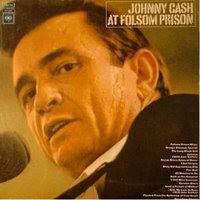 Only Johnny Cash could walk into a prison, say hello, and proceed to sing a song about how bad it sucks to be in that prison.

I listened to this record when I was a kid (my parents had a copy), and I think for a while I thought Cash was in prison, which was why they had to go there and record his show. I guess you can't blame a five year old kid for not understanding why anyone would go play a show at a prison. But, that's just what Cash did, and he ended up turning out one of his most important records ever.

I'm no Johnny Cash expert, but if you ever need proof of the man's genius, it's certainly within the 16 songs on this record. All the flaws are here (along with some overdubs, I think), and he's still infallible. Cash's voice is, as always, the star of the show, but the songs he plays here are an appropriate mix of dread and danger, love and loss. Lots of talk of judges and death. Some songs with a clamoring band, some with just Cash and his guitar.

This record will always be known for "Folsom Prison Blues," but that's not the only reason this record is considered so monumental. "Cocaine Blues" is a classic, and when Cash sings the "I can't forget the day I shot that bad bitch down" line and the inmates cheer, it's both amusing and creepy. Good combo. "The Long Black Veil" and "Send A Picture of Mother" are both sad and slow, just Johnny and his guitar, probably managing to bring some inmates to tears. And, "Dirty Old Egg-Sucking Dog" and "Flushed From the Bathroom of Your Heart" bring on some laughter and lighten the mood.

Cash does some duets with his wife Rose, which are nice enough, and the album closes with "Greystone Chapel," a hopeful song written by an inmate at the prison. Pretty sweet move.

This is another one of those records that I may not listen to more than about once a year, but it's always a nice one to come back to.