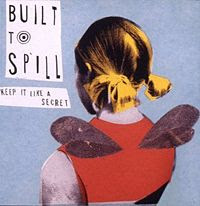 Man, I listened to this record a lot. I picked this one up when it came out and proceeded to, from what I recall, drive everyone around me crazy with it. Eh, it seemed like most people liked it as much as I did, so maybe they weren't too annoyed. As I said: eh.

Either way, I played the shit out of it. I was listening to my LP of this over the last few days, and remembered that my copy must have been flawed or something; it's always played with these terrible pops during the silence between "Center of the Universe" and "Bad Light." I listened to this record so much, that when I first heard it on CD, it didn't sound right to me without those pops leading the song in. Isn't that a great story? No, no it's not. But you get the point. I liked it.

I still do, though I don't often go back to the well for this one, but that can be said for a lot of albums I really like. This is a good one to put on when I want to hear something I know I'll enjoy but don't feel like concentrating on. It's one of those comfortable records.

So yes, the songs are good. There's only ten, and aside from the last cut, they're all kept in a reliable pop format, which is where I think BTS really shine. "The Plan" is a great opener, a song that builds right from the beginning and features some great guitar parts that don't go off the handle and get wanky. "Center of the Universe" is a little mathematical sounding, but I still dig it. "Carry the Zero" is a straight up great dreamy-ish pop number.

Honestly, I think I like all the songs except for the one that everyone kept writing about (and was it a single?), "You Were Right." I don't get why everyone thought Martsch reciting lyrics from old songs was so brilliant. I get it, it's some sort of cheeky homage. I guess I don't get why it was picked out of this record, when songs like "Else" make it sound instantly juvenile. Fill me in if I'm missing something.

If you're looking for a place to start with Built to Spill, I think it's gotta be There's Nothing Wrong With Love or this one. Nice short songs, plenty of hooks, and some great lyrics. And the wank is controlled.