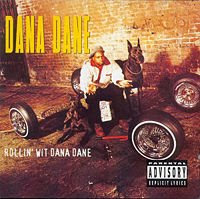 I was introduced to Dana Dane through a K-Tel rap compilation in the late 80's. "Nightmares" spent some serious time in my Walkman, and stood out for a few reasons: the skits within the song were fairly uncommon at the time, and dude was rocking a clearly fake English accent. It was all weird enough to work, and though I was into it, I didn't end up getting a hold of his debut, Dana Dane With Fame until just a few years ago. (I've got it on cassette, so it's not listed here.) It's classic old school shit, a young kid who could hold his own in an era when rap was still coming of age.

Dana Dane stepping full-on into the mid-90's is a mixed bag. He's still sticking with the accent, but he's working it over thick beats that often hint at ill-advised G-funk, an approach that makes it clear he's following trends, and ultimately just doesn't suit his style very well. On his early stuff, the beats were minimal, and when his voice was the focus, it was fun, and that's all it needed to be. He still hits the party songs hard on this one, but with a lot of the tracks featuring an overpowering R&B female singer accompanying him, he gets lost in the mix, and that's no good.

Some of the hooks are rehashed melodies that have been used way too many times before, which not only seems lazy, but also adds to how dated parts of this record sound. But, it's not all bad: "Record Jock" is a cool narrative track that shows Dane doing what he does best: telling a story. "Nina" does the same thing, which is frustrating, because you wonder why he didn't just stick with it. Right in the middle is "Chester," a song about a child molester (get it?) that, while positive with the message, is a bit uncomfortable to listen to.

In the end, there's only a few real stinkers on this one ("Show Me Love" is mostly intolerable sap-heavy R&B), but there's also only a few real strong tracks. About what you would expect from a guy trying to reinvent his style during an awkward time in hip hop.

"Record Jock"
Posted by Wockenfuss at 1:31 AM