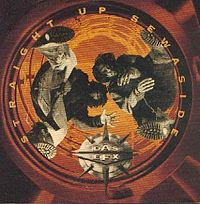 I have to be in the right mood for Das EFX.

While I like their quick back-and-forth style, it can get tiring if I'm not alert enough to take it all in. When I'm feeling awake and ready to face the world, this album is a good one to rock.

I don't know this record super well; I haven't had it for too long, and I'm admittedly a bit late to the game with this group. While a lot of these songs sound the same upon first listen, once you dig in a little they separate themselves. While they're known for their wiggidy-wiggidy style (or whatever you want to call it), they keep that tongue flexing to a minimum on this one, just rapping hard, strong, and what sounds like angry.

The fact that this is their semi-awkward sophomore album, coming only a year after their very successful debut, makes me enjoy this even more. You can hear a little frustration in their voices, and they're quick to let everybody know they're not here to be pigeonholed. Pretty wise for a couple of young dudes.

And no guest spots, either. Remember when that used to happen?

"Baknaffek"
Posted by Wockenfuss at 1:03 AM