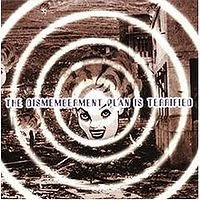 This is one of those records that, in hindsight, we can look back on as the link between the post-punk Plan and the Plan that most people think of when they talk about the band.

Still jagged and confrontational, this one features vocals and melodies that are creeping carefully towards more complex (and even more serious!) subjects, and the result is a record that feels just as supercharged, a little more mature, and smarter. Never a bad combo, and since I'm an unabashed fan of the awkward sophomore album, I've always liked this one. The songs are intricate while simultaneously filled with a don't-give-a-fuck spirit that equals some splendid ass-kickery.

The biggest sign of the band heading in a new direction is the fucking fantastic "The Ice of Boston," a song with lyrics that I'm not sure I understand, but I know I love. It's absurdity that should suck (it wouldn't look good on paper), but the chorus is the biggest and best hook they'd put together up to this point, and it just works in almost every way.

I was listening to this record in the car this weekend and my old lady piped up after about the third time through it: "I really can't stand this guy's voice." I can see that. But for me, Travis Morrison's style of speak is half of what makes the songs so strong. So maybe it's a deal breaker for some people, and they're never going to like this band. That's fine. He takes it down a notch by limiting the talk-singing a bit on the next few records, and he focuses more on melody as a result. We'll get to that.

"The Ice of Boston"
Posted by Wockenfuss at 1:01 AM