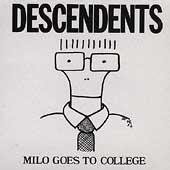 Well, if I'm only going to own one Descendents album, I think this is the one to have.

15 songs, 22 minutes. An incredible display of coffee-fueled teenage rage, harnessed briefly for our enjoyment. Any kid who starts a hardcore-influenced band in high school (do kids still do that?) can only dream of writing songs this good. And if they could, they'd quit high school post-haste. Songs like "I'm Not A Loser," "I'm Not A Punk," "Catalina,"–heck, really every song on this record–does such a good job of summing up young man angst that it would be hard to improve on it.

This is another one of those albums (I've mentioned a few others) that I feel any self-respecting fan of rock music should own. Whether they know it or not, all the mall-punk bands that are hot shit right now owe a great deal to this little record.

At this point I'm pausing the CD so it doesn't end before I finish this. It really zips by.

I don't know what else to say about it. Milo is a pure stallion of the highest degree. These songs are more complicated than they sound. And coming from kids as young as they were, it makes it even more awesome. And I should really invest in more Descendents albums. Add it to the list.

I can say that this is, without hyperbole, the greatest punk album of all time. Considering the year this came out, this thing is light years ahead of its time. I can't find one single imperfect moment on this. Lately I have been claiming that this is my favorite record ever. If its not it is definitely top 3. Obviously I could go on all day. "I'm Not A Loser" is the greatest punk song ever. Ever!