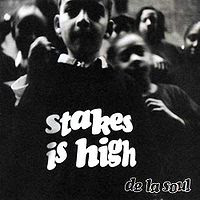 Prince Paul is nowhere to be seen.

Considering that (if I hadn't mentioned it, he produced the previous three records), this record is pretty good. It picks up where Buhloone left off, with the group becoming increasingly pissed at the state of hip hop. While they keep flying that flag, they also fall back on some lazy beats and call-and-response hooks that, even if they're satirical, sound fairly lame.

The lyrics are dope, but if we're looking for a De La record after which they (intentionally or not) couldn't be labeled as outsiders anymore, this is it. They give in to guest spots (Common, Mos Def), let some songs drag a little too long, and allow the whole record to go a little longer than it probably should.

Yes, I gripe. But, there are some good songs. The title track is a fun (but serious) one, and there's a few others. But with beat-dense production that keeps it mostly sparse with accompaniment, it's too much of a shock after hearing the multilayered work of Prince Paul.

Honestly though, for me, the verdict is still out on this one. '96 was an awkward year for hip hop, so I try and keep that in perspective. Considering the shit that was being pumped out around the same time, this could seem brave and brashly rebellious. Which it is.

"Stakes Is High"
Posted by Wockenfuss at 1:19 AM