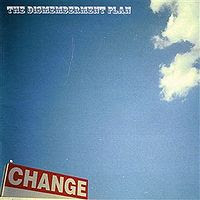 I'm not sure what that says about me. Maybe I prefer my production a tad slicker, my songs more straightforward. Though I don't think that's it. So maybe it's because this is the one I've listened to the most, and the one that took me a while to warm up to. But when I did, when I got it, I couldn't shake it. I listened to this album roughly a thousand times in 2002 alone, and I can still throw it on today and listen to it front to back, no problem.

There's something initially off-putting about this record, and I've never been able to figure out what it is. If I knew anything about time signatures, I think I might be able to put some stock in a theory revolving around the odd ways in which the beats hit on this thing, but as it is, I don't know what I'm talking about in that realm.

What I do know: "The Face of the Earth" is one of my top three favorite Plan songs, one that I keep waiting to get sick of. It was the last few lines of this song that, after repeated listenings that always left me uncomfortable, finally gelled with me and made the rest of this record fall into place instantly:

It's been a couple years and I guess I'm fine about it
It's not like we were married it was 3 or 4 months
And nothing's really different
Though it seems like I've spent my life in planes
Which is kinda strange, but I don't know

Admittedly, it doesn't look mind blowing when it's set out alone like that. But, wrapping up a song that is so wrought with wrenching cluelessness, it's a summary that couldn't have been penned any more poignantly. This album is the first time Morrison has seemed actually unsure, and his fright manifests itself in ways that most of the rest of us wouldn't initially go to. He latches onto a series of mild defeats, looks for a bright side, and if he can't find it, he throws his hands up, turns, and moves away. For me, it's both admirable and a brilliant centerpiece for a record that feeds off its own shiftiness and mortality.

But it's not all morose and shaky. "Pay for the Piano" is fun as shit, and "Following Through," though not an ultimately happy song, features verses that are bright and hopeful feeling, especially after following the dark and stripped-down "Automatic." A lot of the rest of the album flows like this; there are palpable shifts from song to song and sometimes within the song themselves. Overall, this record has always left a dark taste in my mouth, and, forgive me if this sounds corny, has always sounded better to me when it's raining outside.

The record wraps up with "Ellen and Ben," an incredibly catchy narrative that sounds very un-Plan like, and makes for a great end to their proper album career. The bridge on this track is probably my favorite moment in the history of the band. (Download the song from the band's site here. You will love it.) Oh yeah, I forgot to mention: they broke up shortly after this record was released.

You know how it goes.