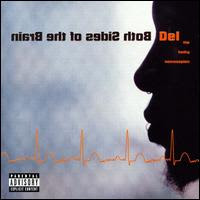 First off: I love this record.

I picked this up a few months after it came out, and bumped the shit out of it all summer. The beats are catchy as all get out, and Del is a man on a mission here. He's constantly cutting in and out, adding backing tracks all over the place, and he never lets up. It might be a tad too long, but that's about all I've been able to find wrong with this one.

After "Time Is Too Expensive," "If You Must" kicks in and it's on. I was convinced this track was going to be solid summer hit, but no such luck. Apparently the world's not ready to rock a track about people who stink. Their loss. "Jaw Gymnastics" is exactly what it sounds like: straight rapping. I'm not a huge Casual fan, but he teams up with Del on this one and rips it. El-P provides another sweet guest spot, showing up on the dark and strangely awesome "Offspring."

Like Del himself, I don't have any trouble understanding why this LP didn't turn out to be the commercial hit I thought it deserved to be. The middle third of this record gets dense, and it can be a lot to handle. I'm not trying to sound like an elitist when I say that; there really are some trying parts. Some of the songs remain fairly light, and as a result, they're usually fun. "Style Wars" and "Fake as Fuck" are a good time. But, it's not all playful: "BM's" and "Skull & Crossbones" both get into Del's battles with alcohol, and "Soopa Feen" tells the story of a half-dead crack smoker.

The best part of the record ends up being the last third. "Signature Slogans" is a dope cut, and "Catch All This" is the best song on the entire record. Fast, relentless; right up my alley. By the time Del teams up with Khaos Unique for "Proto Culture," a love song about video games, it's tough to deny the lyrical prowess that Del has put on display. He wraps it up with the solid "Stay On Your Toes," with a little help from A-Plus of Souls of Mischief. Nice one to end on. Smooth.

No skits, no filler, just a dude grabbing the mic and getting abstract over some fantastic beats. A classic in my book.

It is funny to read your glowing review of this one. I have owned this since 2000 (wow it doesn't feel that long) and have still really never gotten to know it. "If You Must" and "Proto Culture" are obvious standouts, but after that I never fell in love with it. It's one of those that I always planned to spend some time with but never got around to. I guess I'm still planning on it. I could also say the same thing about Deltron 3030.