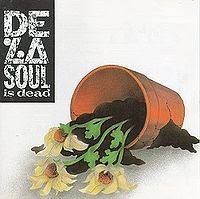 By the time 1991 rolled around, I was hopelessly immersed in the NW rock scene that was taking over both my neck of the woods and the world, and maybe that's why I missed this one upon its release. I think it was also partly due to the cover and the title. De La had clearly grown tired of the "hippie" label, and were eager to show the world they were more than that. I would have been happy if they stuck with it, honestly. And really, how were they going to follow such a classic debut?

They decided to get a little weirder, starting with an intro that is at least a minute too long, and interspersing some other interludes that are lazily titled "Skit 1," "Skit 2," etc. The concept behind the skits is a solid one, but they're not as fun as the ones on the first record. Neither is the rest of the record, for the most part.

This one has grown on a lot of people over time, and while I feel like that hasn't really happened for me yet, I do enjoy listening to it. Their views haven't changed much, but there is a slight air of self-indulgence (the record is far too long), and a sense that they may have believed their well-deserved hype.

The last thing I wanted was for De La Soul to start morphing into just another rap group. I feel like this was the beginning of that progression. Or maybe I just don't "get it" like everyone else. I keep trying.