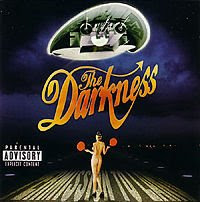 Wow, I forgot I had this.

Yes, I briefly got caught up in the Darkness hype machine. They were fucking everywhere in the summer of 2003, and I gave it a shot. I liked it, though I could never give myself over to it like a few other people I knew. I still like this album, actually, though I found watching live footage of them on the web to be much more enjoyable.

While songs like "I Believe In A Thing Called Love" and "Get Your Hands Off My Woman" are the most well-known for good reason, there are more than a few other choice numbers on here. If I were into this style of music (unbridled retrofied ass-rock), I would love this. But there's only so much I can take. Still, as I listen to it now, I do remember why I liked it. Tracks like "Growing On Me" and "Holding My Own" are legitimately good rock songs, without falling back on stupid (relatively speaking) lyrics to get the thing going.

At the same time, this has been sitting on my shelf, unplayed, for at least two and a half years. And I never bought their sophomore effort. But, I've heard bad things about it, so I'm intrigued.

Was anyone surprised when this band crashed and burned?

"Growing On Me"
Posted by Wockenfuss at 2:02 AM