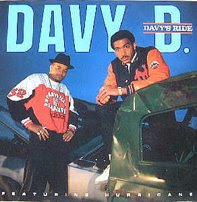 I picked this up a few months ago, a random find at a record store I don't usually frequent.

I don't know a lot about Davy D., though I think he was involved with Run-DMC in some way. Russell Simmons' name is all over this thing, with a blurb on the back and an executive production credit. It also mentions that Davy was a DJ for Kurtis Blow, did some beats for Spoonie Gee, and wrote some songs for the Fat Boys. In '87, these were some pretty tight creds.

As you can see from the cover, this record features Hurricane, who was the DJ for the Beastie Boys at the time. Though it seems like he does some cuts on this one, he also does some rapping, which doesn't suck, but it's not great, either. The music is a weird mix of breakbeats, love songs, and straight up battle raps, courtesy of Hurricane. For all the talk about Davy being a master beat crafter, the beats on this record are pretty repetitive and not all that great.

"Bustin' Loose" sounds like a Run-DMC track that didn't quite make the cut, and "Feel for You" is lame R&B drivel. But, when the beats start hitting and the Hurra starts rapping, it can be fun in parts. "Live on Hollis Day" isn't much more than a drum beat with Hurricane doing angry-raps over it, and it's sort of sweet. But then it's followed by "Ohh Girl," which is an embarrassing love song with some bunk singing.

It's hard to tell what they were going for on this one. It sounds like a poorly thought out mixtape. Scratch-heavy instrumentals and hard raps sound fine next to each other, but the love songs continuously threaten to kill the flow.