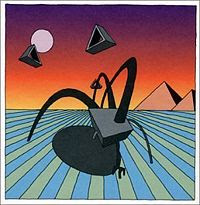 Ask most Dismemberment Plan fans, and they'll tell you this is their magnum opus, the record that defines the band. They're right. Even though I prefer their next one, I'm not sure I can unequivocally say it's a better album than this one. When you listen to Is Terrified and this one right next to each other, the difference is stark. It reminds me a bit of Radiohead going from The Bends to OK Computer. You go from "Wow, this band is great" to "Holy. Fucking. Shit." Same deal here.

Listen to "What Do You Want Me To Say?" and there's no doubt: they've hit their stride. It's like "The Ice of Boston" fully realized and trimmed of any fat that was getting in the way of it ruling. It goes from there. "Spider in the Snow" sounds like Death Cab but better; "I Love A Magician" echoes back to the first two records, but the swirling screeching in the background is much more deliberate and way, way better. And "The City" is just a great, great song.

Like I said in the previous post, Morrison holds back on the quirk with his vocals this time around (though he reverts a bit in "Girl O'Clock"), but if anything, it's just made room for lyrics that might plunk a lump down in your throat if you read them after a bad breakup. I have been kicking my own ass for years for not discovering this right when it came out. I said the same thing about their first one, but I really could have used this one.

If you ever wonder why this band had some of the most hardcore fans out there (or at least it seemed that way when I saw them), listen to this record. It's every bit as good as people tell you it is. Even almost ten years later.

"You Are Invited"
Posted by Wockenfuss at 1:29 AM