Death Cab for Cutie - Something About Airplanes (CD, 1998) 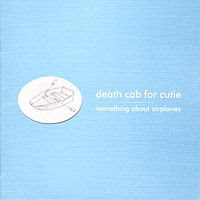 Right before I moved away from Eugene, in the summer of 1998, I met a girl at a party and fell in love with her for about an hour. We were sitting on the back deck of the house where the party was, smoking cigarettes and drinking beer from bottles. (This was a classy party, by Eugene standards.)

We were talking about music, and though I'm sure I was more than a little drunk, I was just astounded by her taste. She liked Frank Black's solo stuff more than the Pixies (me too!) and knew about bands (really knew about them) that girls weren't supposed to know about. I was absolutely impressed, and smitten enough to forget I had a girlfriend. Though I quickly remembered, and the subject matter stayed wisely focused on music. And that was fine by me; like I said, she knew her shit.

She asked me if I had heard Death Cab for Cutie. I had not. She began gushing, telling me how I just had to hear their new record, their debut. She said it was the best thing she had heard in years. Usually, when people I meet at parties give me advice on music to check out, I smile politely while I roll my eyes internally. This time I listened. I don't know how I remembered their name, but I did. The next time I was out record shopping, I looked. I found. I bought.

"drinking champagne from a paper cup/is never quite the same/and every sip's moving through my eyes/and up into my brain/at half past two; about time to leave/'cause the dj's playing rhythm and blues"

Listening to that song, specifically when I was alone and bleary-eyed drunk, is an experience that sent me into some seriously wuss-filled places that I will never reveal the true extent of. But it was therapeutic in some surely fucked-up way.

I never really got past this Death Cab. I watched them get more and more famous, and became less and less interested. That's sort of my thing, but that wasn't the sole reason. I legitimately love this record, and I didn't want any of their new shit to overtake it. It was a timing thing. I was vulnerable. They got me.

And this will always be my favorite song of theirs:

"Pictures in an Exhibition"
Posted by Wockenfuss at 1:28 AM