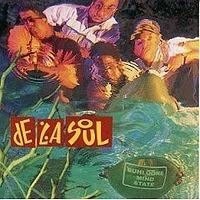 After their big debut and the anticipation involved with their sophomore effort, it was probably nice for De La Soul to sink into their third album, and just get back to making music. This is purely speculation on my part, but to me, they sound more comfortable on this one.

The intro's short and entertaining, and then they bust right into it. I've always thought "Eye Patch" was a pretty sweet opening track, if for no other reason than it's weird as shit. "Patti Dooke" is a great song, though it's the most un-De La the group has sounded up to this point. I think it's due to the live instrumentation, and it doesn't really matter. The song works.

Their frustration with the hip hop scene really spills out on this record, and while their raps are still as nutty and unfocused as ever, they certainly sound more mature. For me, that's a minus, but it's understandable.

So, the album starts strong, but it runs into some problems. "I Be Blowin'" and "Long Island Wildin'" are b-sides if I've ever heard one. Put 'em right in the middle of the record, and it makes for a rough patch. They have trouble picking it back up after that, though the record finishes as strong as it starts. "Breakadawn" is sweet as shit (though very Tribe Called Quest), and "Stone Age" with Biz Markie is a great closer.

So, again, my expectations are too high for De La, but I like parts of this one a lot. It gets rocked.

"Breakadawn"
Posted by Wockenfuss at 12:59 AM