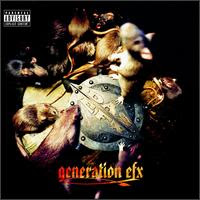 I think I've maybe listened to this CD twice. Nothing grabbed me; I gave it a rest.

This is late-90's era hip hop, when a lot of groups like this were trying to maintain some relevance in the "game." That means more guest spots, different producers, and apparently an album cover with a bunch of rats on it.

Redman's here (shocker), and so are MOP and EPMD. It's really not that bad, some pretty standard tracks with some decent raps, and then the title track kicks in. When you hear the opening riff from "Eye of the Tiger" by Survivor, you know it won't end well. It doesn't. (I think I heard "never rocky like Balboa" in there. Yikes.)

So maybe this one's the beginning of the end. I still let it ride when it comes through the shuffle on the iPod.

"Rap Scholar"
Posted by Wockenfuss at 1:16 AM