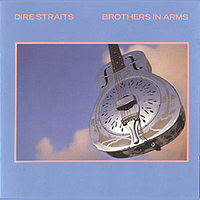 This ain't a bad record to keep on the shelf.

If you weren't around or fully cognizant in the year 1985, you'd have a hard time fathoming just how much the "Money for Nothing" video was played on MTV. As low-budget and cornball as it looks now, in '85, I wasn't even in double digits in age yet, and it blew my fucking mind. The kids on drugs must have been shitting their pants. Whenever there's a special about the early days of MTV, or MTV in the 80's, they always show that video. This will never change.

That song is the odd one out on this collection, and it's got to be a bummer for Mark Knopfler that that's the song his band's always going to be associated with. It's not representative of their sound at all. But really, neither is "Walk of Life." But, if going outside their comfort zone aided them in the selling of a jillion copies of this record, I'm not going to say it was a bad idea.

I don't listen to this album often, but I always enjoy it when I do. Some of the songs have some egregious 80's sax that really sounds dated, but "So Far Away" and the title track never disappoint. And really, "Walk of Life" is as catchy as they come.

Another selling point: you can find this in any record store in any city on any day of the week. Probably for a few bucks. Don't be ashamed. It's OK to like this.

"Brothers In Arms"
Posted by Wockenfuss at 2:54 AM