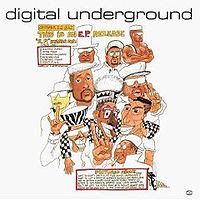 While this EP is often best remembered for "Same Song," which features the debut of a young Tupac Shakur, there's more to it than that. This is actually a fairly worthy continuation of Sex Packets, with songs that share a lot with their predecessors. Some of 'em are remixes, so that goes without saying.

"Same Song" is a good one, and it deserves all the attention it gets. Shock pulls the sweet move of letting the beat ride for the last two minutes, which is both unnecessary and hilarious. "Tie the Knot" is a piano-random song that gets its charm from sounding completely out of whack. The remix of "The Way We Swing" changes up all the lyrics, keeping the basic format but making a looser version of the track.

"Nuttin' Nis Funky," at almost ten minutes long and largely instrumental, is trying. But the reworking of the beat from "The Humpty Dance" is interesting if you can afford them some extreme indulgence. The remix of "Packet Man" is strangely New Jack, likable as a novelty but not close to being better than the original. "Arguin' on the Funk" is the "Rhymin' on the Funk" beat with Shock and Humpty arguing with each other, only interesting because they're the same guy and he pulls it off pretty well.

So, considering that this was most likely a quick release to cash in on the Digital Underground name before America's love affair with Humpty Hump went south, I think it does its duty.