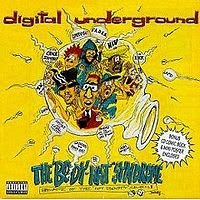 If there was ever any doubt that Shock G's certifiably nuts, it was squashed with the release of this album.

I'm not exactly clear on what a body-hat is (it's been a while since I've gotten deep into this one), but I think it might be some sort of metaphorical body condom. Whatever, it doesn't really matter. The concept album focus here is loose, so there's plenty of room for thick beats that seem more preoccupied with having a good time. This is where DU shines, and this record ends up being impressive. Weird as shit, but impressive.

It's long, lyrically dense, and the drums hit hard. It's Shock G sounding more "West Coast" than ever, without giving in to the obvious repetitiveness that hounded some of his colleagues from the Bay. And Money-B holds it down as usual. And yeah, we get it Shock, you're a freak.

"The Return of the Crazy One"
Posted by Wockenfuss at 12:59 AM