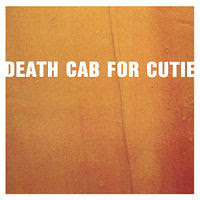 I was given this CD a few years ago by a friend who was moving, and getting rid of most of his earthly possessions. I thought I hadn't listened to it more than a few times, but as I listen to it now, I realize I must have had it my car, dubbed cassette style, for a short time. Because I do know these songs.

And they're OK. It just doesn't have the same "oomph" as their first one. It's cleaner, and the guitar is much more defined and precise. Maybe that's a good thing, I don't know. It doesn't do much for me.

But, I do like "We Laugh Indoors" and "Why You'd Want to Live Here." They're a little more ragged, a little more urgent than some of the other songs. But they're moving, going towards something bigger, something that doesn't really work for me.

But I remember having a good time listening to this for a while.

"A Movie Script Ending"
Posted by Wockenfuss at 1:56 AM