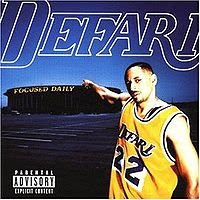 I went to see Outkast in Los Angeles in 2000, maybe 2001. Ludacris opened (this was before he was big time), and Xzibit played after him. I'm not a huge Xzibit fan, but he put on a pretty good show. The thing I noticed most was his hype man/secondary rapper guy. Dude was flying around the stage, and when it was his turn to kick a verse, he fucking nailed it. While all the other hangers-on were swinging towels and hitting the Courvoisier way too hard, this cat was all about the performance. It was really something to see.

I can't remember if I figured out his name at the show or determined who he was later. I feel like my brother helped me narrow it down, and I decided I should check out his solo CD. This is it. It's not one of my favorites, but I've never thought about getting rid of it in the seven or eight years I've owned it. He's all about lyrics. And that is fine by me. But, the songs are long and the beats are fairly empty, so it can get a little tedious after a half hour. But, if I'm in the mood for some solid hip hop from a dude who is far from corny, this is a good one.

He's smart as shit, and it comes through in the songs. He's almost got too much to say. Better that than resorting to the same ol' shit. He steers clear of the cliches, doesn't really swear that much, and has a strong delivery.

This is the "real hip hop" you hear people talking about. Heh.

"Focused Daily"
Posted by Wockenfuss at 2:14 AM