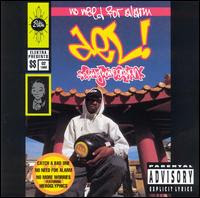 I had this CD (and by CD, I probably mean tape) back around the time it came out, along with Del's debut, I Wish My Brother George Was Here. I don't know what happened to 'em. Anyway, I just re-bought this CD a few months ago. In fact, it's another one I forgot I had. But, I do, so here it is.

Now that I'm listening to it, it's coming back to me a little bit. "Wack MC's" and "Catch a Bad One" were definitely favorites from back in the day. And the title track is a slick one, too. This CD coincided with the origins of the Hieroglyphics crew, and back in '93, the sound they were whipping up was the shit: thick bass lines that the rest of the beat crowded around, and lyrical smoothness that was smart without getting into the dumb stuff.

Del's got a voice like nobody else, and I guess you either love it or hate it. I can see why people don't dig him, but it's easier for me to understand why people think he's one of the most original voices in hip hop. He's clearly a little bit unstable, or stoned all the time, or both, and it just adds to his nutty style of speak.

This is the kind of loose hip hop I love: frenetic, off-topic, but lyrically fun and always interesting.