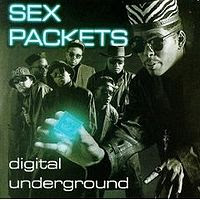 If you were anywhere near MTV during the summer of 1990, you saw Digital Underground's "The Humpty Dance" video. A lot. If you were me and my friends, you couldn't get enough of it. We were mesmerized by the fake-nose wearing nutjob who was fronting the band. (Of course, it took me 200 viewings of the video to figure out that Shock G and Humpty Hump were the same dude.) This was some new shit. And the song was great: guaranteed to haunt your (my) teenage mind for an entire school day, just so you could go to your friend's house after school (we didn't have MTV) and see the video three more times before dinner.

That summer, my friend and I went to the mall, on the hunt for new music. He ended up picking up Sex Packets, and when his mom saw it in his hand when she picked us up in her minivan, she seemed a little weirded out by it. I can't even imagine what she thought a sex packet might actually be. As a 13 year old boy, I thought I knew what it was, but given my sexual inexperience and the fact that sex packets aren't real, I think I was probably more confused than anything. I had my friend dub it onto cassette for me, and I rocked the shit out of it, Walkman steez. It didn't last long: one night I was playing "Freaks of the Industry" on my home stereo when I thought my mom wasn't paying attention, though I quickly found out she was. The tape was quickly confiscated and disposed of. And rightfully so, but I was pissed. I must have found some other way to listen to it, because I remember it being around.

Anyway, there was a reason, other than "The Humpty Dance," why I wasn't going to be able to live without this one: it's great. This is an involved album, a collection of songs that work as a loose concept record, but calling it that puts it in a category it doesn't belong in. Any of these songs can stand up on their own. But, listening to 'em in sequence makes them even better. The one-two punch of "The Way We Swing" and "Rhymin' On the Funk" makes for an incredible opening. (This is where you start the album after you eventually get sick of "The Humpty Dance," which is track one.) From there, it just keeps going.

The songs are long, but most of them don't feel like it. I always forget that "The Way We Swing" clocks in at almost seven minutes. And if you've never partaken in the full nine minutes of "Doowutchyalike," than you're not really living. The title track is the only one that drags a little bit, but given the consistency of the rest of the record, it doesn't really matter.

One more reason this album is a classic: Money-B. Shock's sidekick is the better rapper, an unintentional show-stealer who just rips shit every time he's on the mic. It's a pleasure to hear him work.

This is one of those albums that I'll always have a copy of.

"Doowutchyalike"
Posted by Wockenfuss at 2:58 AM