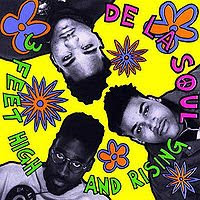 Wow. I don't even know where to start with this one. I could go on for days.

First off, I'm listing the date like that because I have the reissue, which came with a bonus disc of b-sides. Not that it really matters, but I like to get specific. Secondly, this is one of the most brilliant and important records in the history of hip hop. And I really, really mean that.

I picked this gem up on cassette when I was 13, and I wish I had a good story as to why I decided to buy it. I know I hadn't heard it before I purchased it, so I think I was just giving it a shot. (Kids: this is something you had to do in the pre-internet days.) The rap section was pretty small at Fred Meyer (it was small everywhere in those days, but really small at Freddy's), so my options were limited. I remember always staring at the same tapes: MC Hammer's Let's Get It Started, Too $hort's Life Is..., Just-Ice's The Desolate One. De La's tape glowed, literally. The thing was neon. My tastes were pretty much encompassed within two genres at the time: rap and classic rock. This cover had rappers and hippie daisies on it. Looked good to me.

When people talk about this being the first rap record with skits, I'm not sure if that's technically true. But, it was certainly the first to integrate them so fully into the music. I can still listen to the game show skits on this record, and I'd miss 'em if they weren't there. They're trying to be funny, but they're also smart, and they're just one reason why this record is so good.

The main reason this record is so good: Prince Paul. Not to take anything away from De La Soul, because they are brilliant in their own inimitable way on this album, but it's Prince Paul who's laying down the beats and calling the shots. And the beats are amazing. The interludes are amazing. There is not a bad second on this record. I have heard so many songs on the radio since first hearing this record, and realized that I am recognizing them from being sampled on 3 Feet High and Rising. This is another one that people point to, much like Paul's Boutique, that simply wouldn't be commercially possible in this day and age. And though the songs are clearly sample-based, Prince Paul makes entirely new compositions out of the material. Songs like "Say No Go" and "Eye Know" make no secret about what they're using, but the method is crafty. It's something that's really missing from hip hop these days.

De La Soul themselves were barely 20 when they made this. It's pretty nuts, especially when you listen to the message they were trying to get across. It's not that they sound world-weary, it's that they care. On some level, this appealed to me just as much as the gangsta raps that NWA were kicking out, but for completely opposite reasons. Ice Cube didn't give a fuck, but Trugoy called himself the Dove. He clearly didn't give a fuck either. It was cool as shit. And while everyone talks about how this record was consumed with hippie tones and cries for peace, it's really not.

It's just fucking smart, catchy, varied, and as close to perfect as hip hop's ever going to get. I'll stop now. I'm getting worked up.