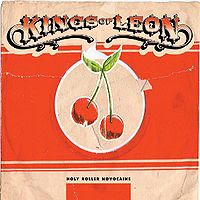 I can't remember what made me buy into the hype surrounding Kings of Leon. I'm pretty sure I picked this EP up before I had even heard them, so I must have grown tired of reading about them in every music rag I flipped through. Sometimes they just goad me into listening to the shit.

Imagine my surprise when I actually liked the music. These five tracks are raw rock, nothing fancy. Summing up the band was tough for music journalists, and I understood why when I heard their songs. Sure, it was Southern rock, but it wasn't quite that simple. The singer's voice was certainly divisive; I wouldn't have blamed some people for being turned off by it. I didn't mind it, still don't. Caleb Followill has a vocal style that almost seems intentionally lazy, but it fits the music just fine.

For a brief introduction to the band (the whole disc is only fifteen minutes long), this small collection works well. "Molly's Chambers" is a great opener, and though "California Waiting" was just destined to be a pop hit, I'm not sure that it ever really took off the way they thought it would. I was a bit taken aback when "Molly's Chambers" ended up in a VW commercial, but it should have been a clear indicator that these guys were ready to go mainstream at any cost. Maybe I've got that all wrong, but considering what they're doing now, it sure seems like that was the plan.

Once the beards came off it was all downhill from there.

"Wicker Chair"
Posted by Wockenfuss at 1:54 AM