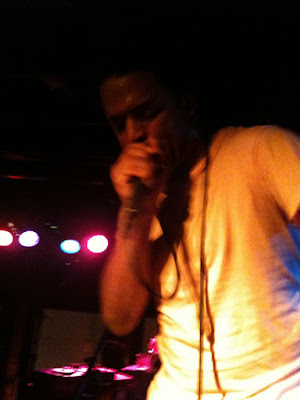 Two Saturday shows in a row. Big time stuff for an aging music snob like me.

The wife and I went to Rotture (in Portland's historic meat packing district) solely to see Busdriver, who has quickly become one of my favorite rappers on the planet. We knew there would be two opening acts, but because it's a hip hop show in Portland (maybe they're like this everywhere) there were actually five opening acts, if you count the DJ. I've been burned by padded bills like this before by shows being dragged out, but this time around it all ran smoothly.

First to hit the stage was Travis Wiggins, a Portlander who I was unfamiliar with. I'm glad we caught his set. It was just him and a female vocalist, and they did some fun electro-psych-pop stuff. Tope was second, another local. He sounded quite sincere slinking through a song about all the classic soul music he grew up on, though it was slightly marred by the fact that he's translucent white and looks about 23. But apparently Curtis Mayfield was his inspiration for copping an accent and dropping recycled hooks about twisting blunts. He did have some nice Air Trainers on though–I'll give him that.

(On a side note: he was one of those rappers–and if you've ever been to a hip hop show, you might know what I'm talking about–who kept urging people to come up to the front of the stage, and then badgering people when they didn't. I've never understood why it's my obligation to act like I'm interested in something that I'm only in the same room with by pure coincidence. Why someone on stage would want to draw attention to the fact that nobody is watching them is beyond me. This is such a huge pet peeve of mine.)

For what it's worth, I'm not trying to sound like a dick. It just wasn't my thing.

So that concluded the part of the show I didn't realize I was going to see. (Which is, by the way, probably my fault. I didn't really scope the listings too hard.) The touring acts were next, the first of which was Open Mike Eagle. Dude was fantastic. He had smart lyrics, a potent flow, and a solid attitude. But he clinched it for me when he sang a hook that was based on Frank Black's song "Thalassocracy." Such a bizarre moment, and one that had never even occurred to me. I approached Open Mike at the merch booth after his set and asked him about it, and he was so shocked that I knew what it was from that he gave me a copy of his CD. Seriously: a very cool guy. I'm going to keep an eye on him and see if he comes back to town.

Abstract Rude was next, and though he's a little too irie for me, he put together a fun set. The definite highlight for me was his full-on cover of Geto Boys' "Mind Playing Tricks On Me," complete with a decent Bushwick Bill impression. If I was into bong hits, like really into bong hits, Abstract Rude would probably be more up my alley.

Busdriver finally hit the stage around midnight, accompanied by Antimc, who was set up with a drum machine, a guitar, and some sampling gear. Busdriver also had a sampler and some other knob-twiddling goodies. He wasted no time, and went nuts from the first beat. 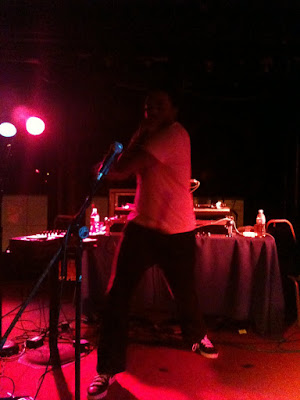 Because I'm a sad fanboy (and because it wasn't very crowded), I was front-row center. The Driver played a wide mix of old and new, and did some great fuckery with his sampler and sweet vocal manipulations with this foot pedal thingy he had rigged to one of his mics. He made my wife happy by playing "Casting Agents and Cowgirls" (that's her favorite song of his) and made me happy by playing "Unemployed Black Astronaut." He also knocked out "Sun Shower" somewhere in there and "Scoliosis Jones."

He played a bunch of songs, and went full bore on all of them. He was flicking sweat on us by about the third song, and when at one point he put his hand on my head, it was what I would consider "mad damp." He was working for it. He was cool enough to do an encore after the blistering performance of "Me-Time (With the Pulmonary Palimpsest)" and I was cool enough to buy a t-shirt from him.

So we're all winners.
Posted by Wockenfuss at 2:29 AM

What a great way to spend a Saturday night! Busdriver is officially my second favorite hip hop artist.