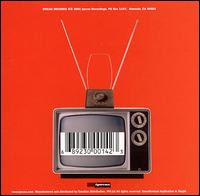 When you get burned by the Melvins, you get torched.

I distinctly remember buying this CD at the Music Millennium on NW 23rd here in Portland. It had just come out, and I was in a Melvins mood. I took a chance. What I ended up with is a CD I've listened to twice.

This is a poorly recorded live show from 1998, featuring about 57 minutes of feedback, synthy noodling, and noise, followed by a sludgy version of "Eye Flys." The disc is broken up into two tracks, with the first being 59:24 long, and the second clocking in at five seconds. Yeah, the second track is not even dedicated to the actual song they play.

Such are the chances you take with the Melvins. You can consider it a huge annoyance, or part of the fun. I've still held onto this one, so I must find it sort of fun.

Here's the first ten minutes.
Posted by Wockenfuss at 1:07 AM