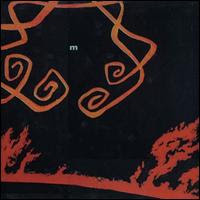 1999-2000 was a great time to be a Melvins fan. Not only did they put out three albums in well under a year, they also managed to make those albums highly listenable. A crazy concept, I know. To top it all off, they released this, the limited edition 3-LP set that collected (or claimed to) all three discs of the trilogy: The Maggot, The Bootlicker, and The Crybaby.

While the entirety of those albums is not actually represented here, most of it is, and if you're like me, you had already purchased all three on CD, so you were covered. I received this collection as a Christmas present from my brother, and it turned out to be a most fortuitous one: this is now one of the most valuable records in my collection. It's also one of the most interesting, presentation-wise. Each LP is a picture disc, with corresponding-and-opposite images represented on either side. You can check the photos here for a more detailed breakdown. Needless to say, this is the only thing I own with a swastika on it, and it still creeps me out to look at it. Gutsy move, Melvins. But despite the mixed messages, the cover art and the LPs themselves are really beautiful to look at, and really well put-together. Still, sort of creepy though.

The music is equally creepy, but in that lovable Melvins way. The Maggot is drawn-out and slightly challenging, with a fucked-up track listing that is best ignored. Front-to-back that shit. It's a great album.

The Bootlicker is possibly my favorite Melvins album. Tracks like "Mary Lady Bobby Kins" and "Up the Dumper" still sound amazing to me. Heck, the whole damn thing does. "Let it All Be" is pure bliss for the full ten minutes. An incredible song. And of course, you get the complete disarray of "Prig" at the end to remind you who exactly you're listening to. This one spent some serious time with me during the year following its release. Couldn't get enough, and still can't.

The Crybaby has always been a tougher sell for me. Covering "Smells Like Teen Spirit" with Leif Garrett on vocals just never seemed right to me. Not only does the version sort of suck, it always struck as me as being in poor taste. But anybody messing with Nirvana strikes me as bad taste, and that's my cross to bear. The rest of the record fares better, with the highlights being Mike Patton's guest spot on "GI Joe" and the Pink Floyd-y "Mine is No Disgrace." Not the ending I would have liked to have seen for this trilogy, but with the Melvins, things rarely work out the way you think they might.

"Mary Lady Bobby Kins"
Posted by Wockenfuss at 1:57 AM

You're welcome for such a great gift. It was the only one that 2nd Avenue had and that was the only time I have ever seen it in person. It's annoying that they leave out some of the tracks but the whole thing seemed to be more of an art project than a true representation of the albums anyways. I think I like "The Crybaby" a bit more than you but it still never ruled like I wanted it to. "Mine Is No Disgrace" has to be the highlight. For me "The Maggot" was just unstoppable. It is so heavy and such a nice surprise after the laborious (even by Melvins standards) "Honky." "The Bootlicker" is also quite nice but I have never quite fallen in love with it like you have. Well, there's always next decade.