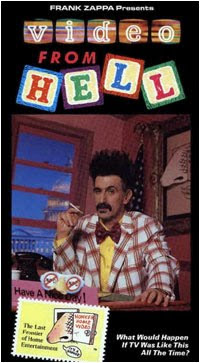 I watched this movie a long-ass time ago, and have barely even thought about it since. A friend of mine who works at a video store gave me a copy last week, and coincidentally, we're about to get into the first of many Zappa-related albums, so I figured I might as well dive right into it.

If you're hoping for some talk show-ish action with Frank sitting behind a desk like he is on the cover there, you're out of luck. This is basically a teaser video (with a bunch of extras) for the stuff Zappa was getting set to release on VHS in the late 80's. So, there's previews for the Uncle Meat movie, The True Story of 200 Motels (a making-of documentary), and a few clips from Baby Snakes. There is also random footage of various eras of Zappa: Some short interview clips, the video for "You Are What You Is," FZ and Steve Vai going double wank-tastic on an extra-long version of "Stevie's Spanking," and the obligatory claymation from Mr. Bickford.

Good stuff, but it's pulled from all over FZ's career, so it's hard to get too excited about any of it when you know it's going to get cut short. If nothing else, this video just really made me want to see the Uncle Meat movie again. It hasn't been released on DVD yet, and the videos are way overpriced on eBay. I've got two ideas for where I might be able to rent it here in town, but they're long shots. I'm going to try and make it happen.

Get ready for the Mothers.
Posted by Wockenfuss at 1:00 AM

Is this where Bohemia took the random Zappa clips that they would air from time to time? A lot of the descriptions sound familiar. Or did they get them from "Baby Snakes?" Either way, sweet gift.