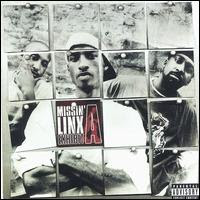 Back in the early aughts, I was on a mad search for any albums containing guest spots from Freddie Foxxx. That journey led me to this, a six-song EP from some dudes who used to be in the Beatnuts, or are affiliated with the Beatnuts, or something like that.

So, I signed up for the song "Family Ties," but I kept this bad boy because the rest of it is solid as well. Not spectacular, but I was pleasantly surprised. Dudes can bring the lyrics, and the beats are hard-hitting without trying to do too much. I figured I'd see more from these guys, but I never have. I actually think I have one of their 12"s, but I don't feel like going to see what song it is. I think it might be "M.I.A.," which is the last song on this record.

Around the turn of the century, Freddie Foxxx was in prime form, spitting verses that took out every one in sight. Which is why I was so disappointed to find out that he only rocks the chorus on "Family Ties," along with some shit-talking at the beginning and end. Bummer. But, because I'm a completist, the song still makes it onto the Bumpy Knuckles guest appearance mixes. Man, I haven't made one of those in a long time. Probably needs to be updated.

"Family Ties"
Posted by Wockenfuss at 1:38 AM